Today marked a turning point in the project: The first holes were drilled and an assembly was assembled! The rudder skeleton is now cleco’d together, and it’s looking pretty decent.

As you may remember from the last entry, I’d made a mistake in the rudder spar and it was about 12mm too short. A new spar was fabricated, and the dimensions are spot-on! No more gap at the top. 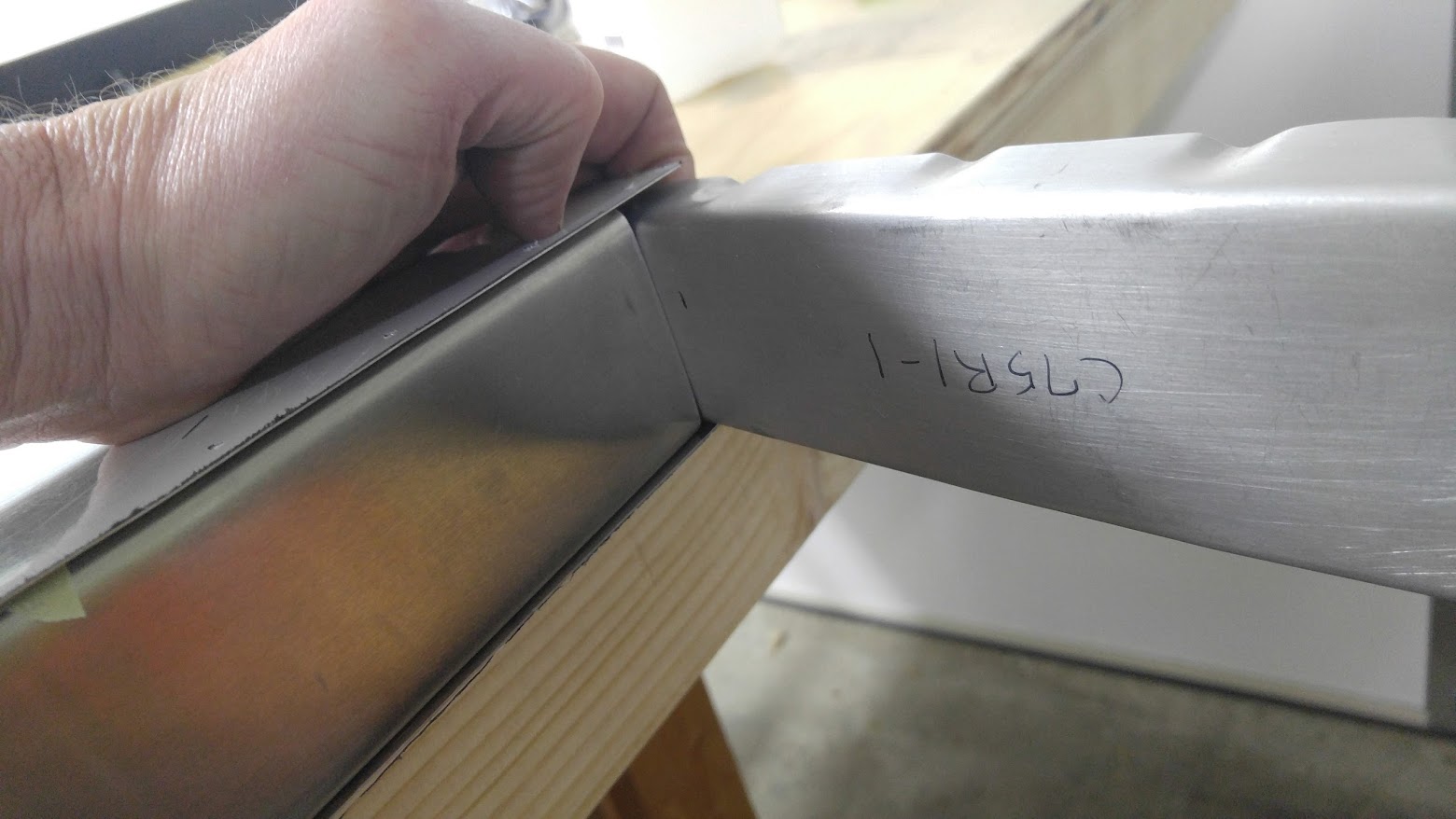 Once that was fixed, I realized I was not really happy with some of the rudder ribs. Me being me, I decided to remake three of them. The remakes are a better fit in the new spar, and just look nicer. At that point, it was time to start actually putting things together. The hinge location was carefully marked, and the drilling and clecoing began. Liz was kind enough to document the occasion. And before you worry about me drilling through and hitting my fingers, I was holding a small wood “stop block” behind the spar. This not only protects the fingers, but it keeps the drill from busting through and possibly banging the chuck against the part you are drilling. 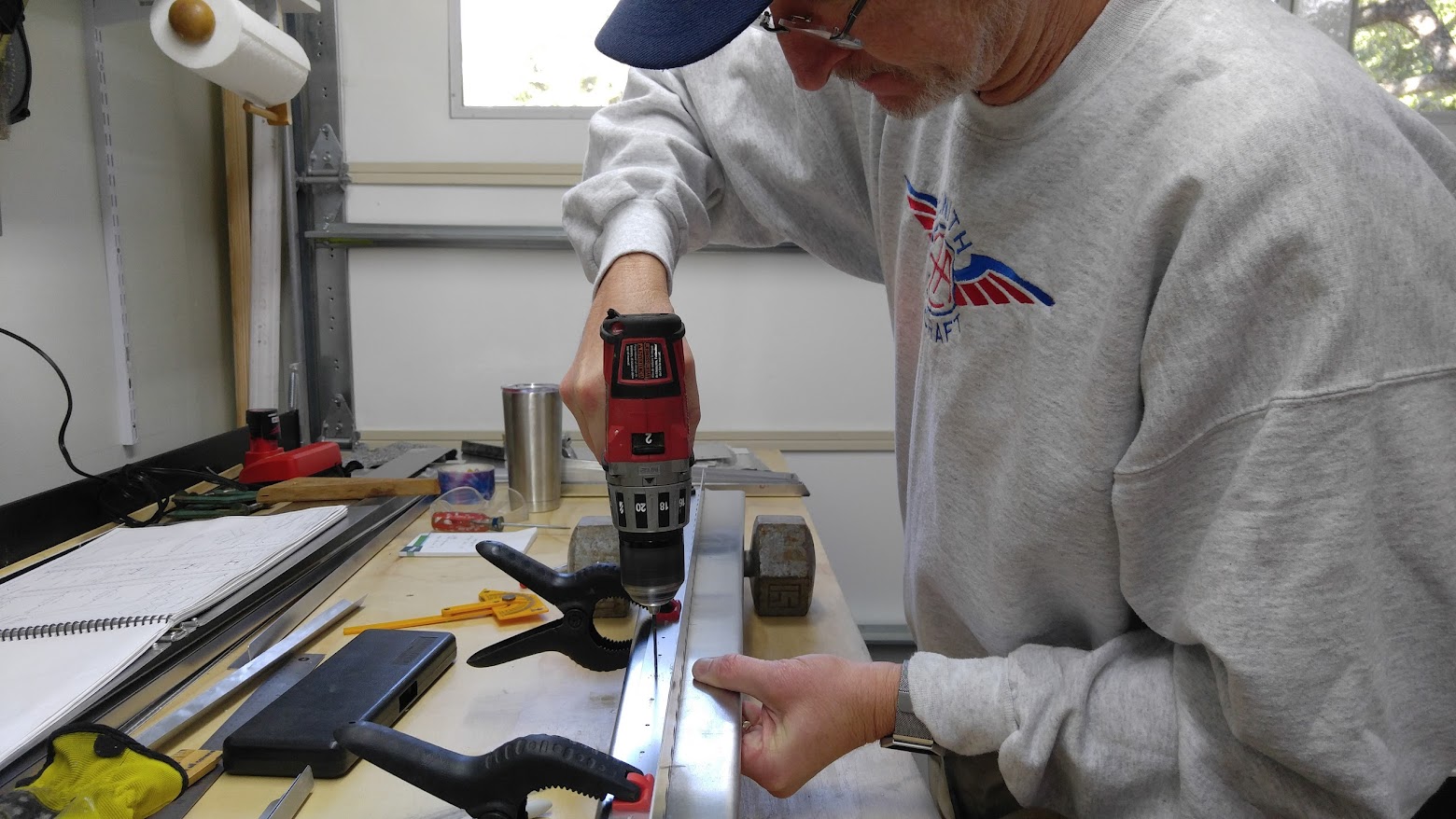 Here’s another shot with the doubler cleco’d in place, and ribs going in. 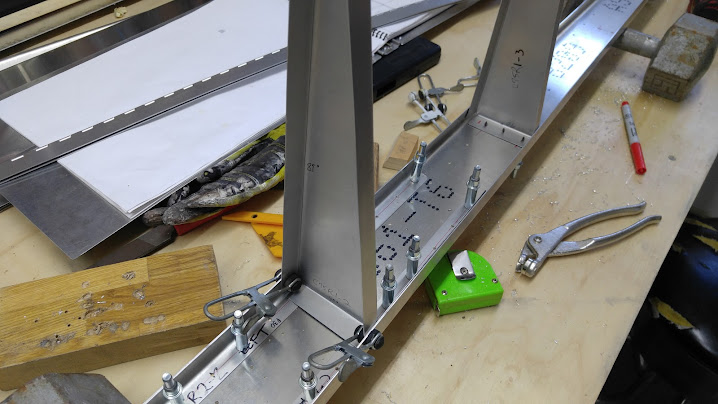 And finally, the skeleton all cleco’d together and being modeled by yours truly. 🙂 Note the nail apron, which works great for holding clecos and the cleco pliers while working. 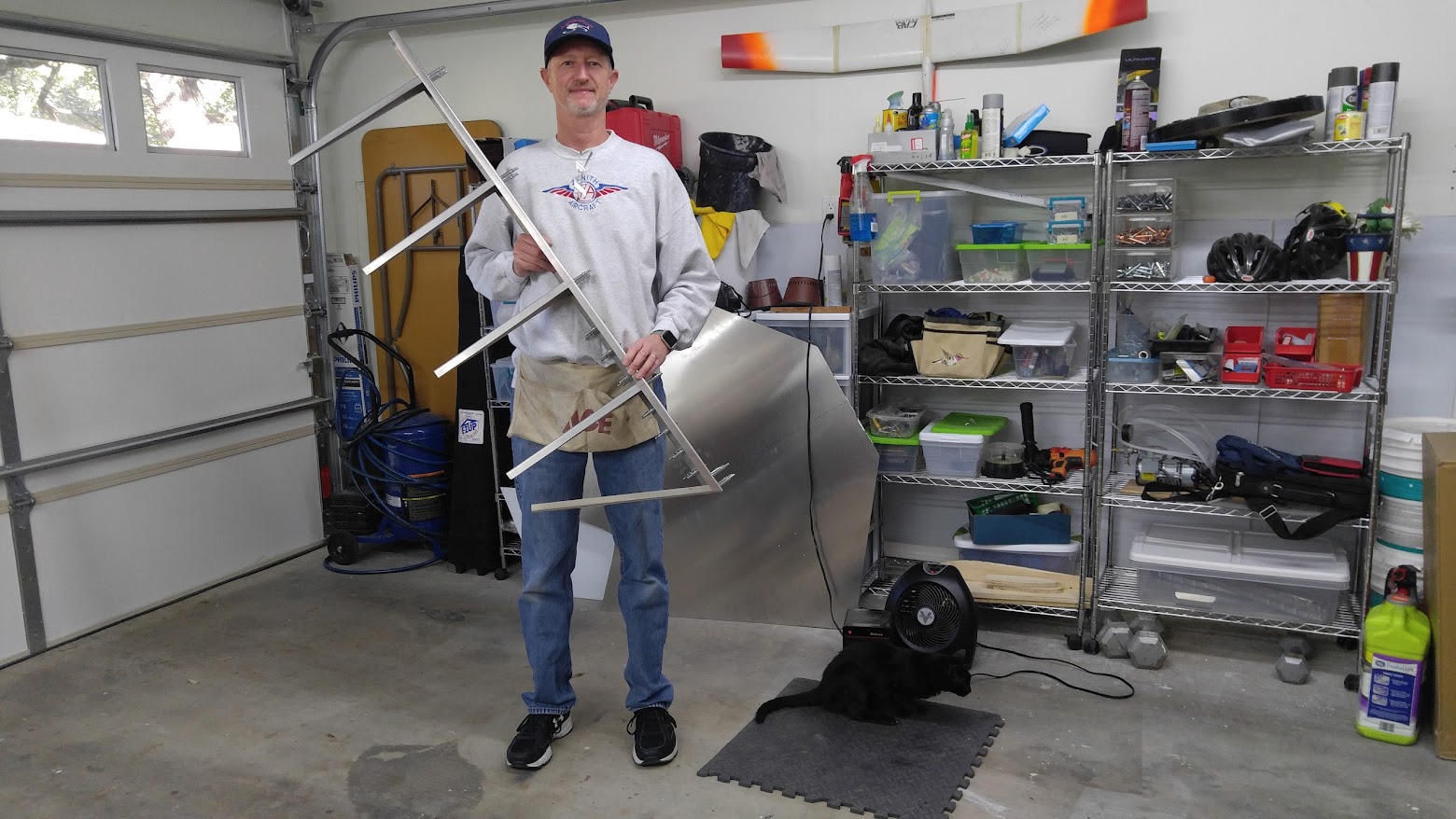 The final task for the weekend was to tackle two parts I’ve been dreading, because they are made from 1/8″ material and needed to be bent. Considering how much trouble I had with a thinner (.063″) part that had a similar shape, I was not looking forward to it! Here are the two parts cut to shape. 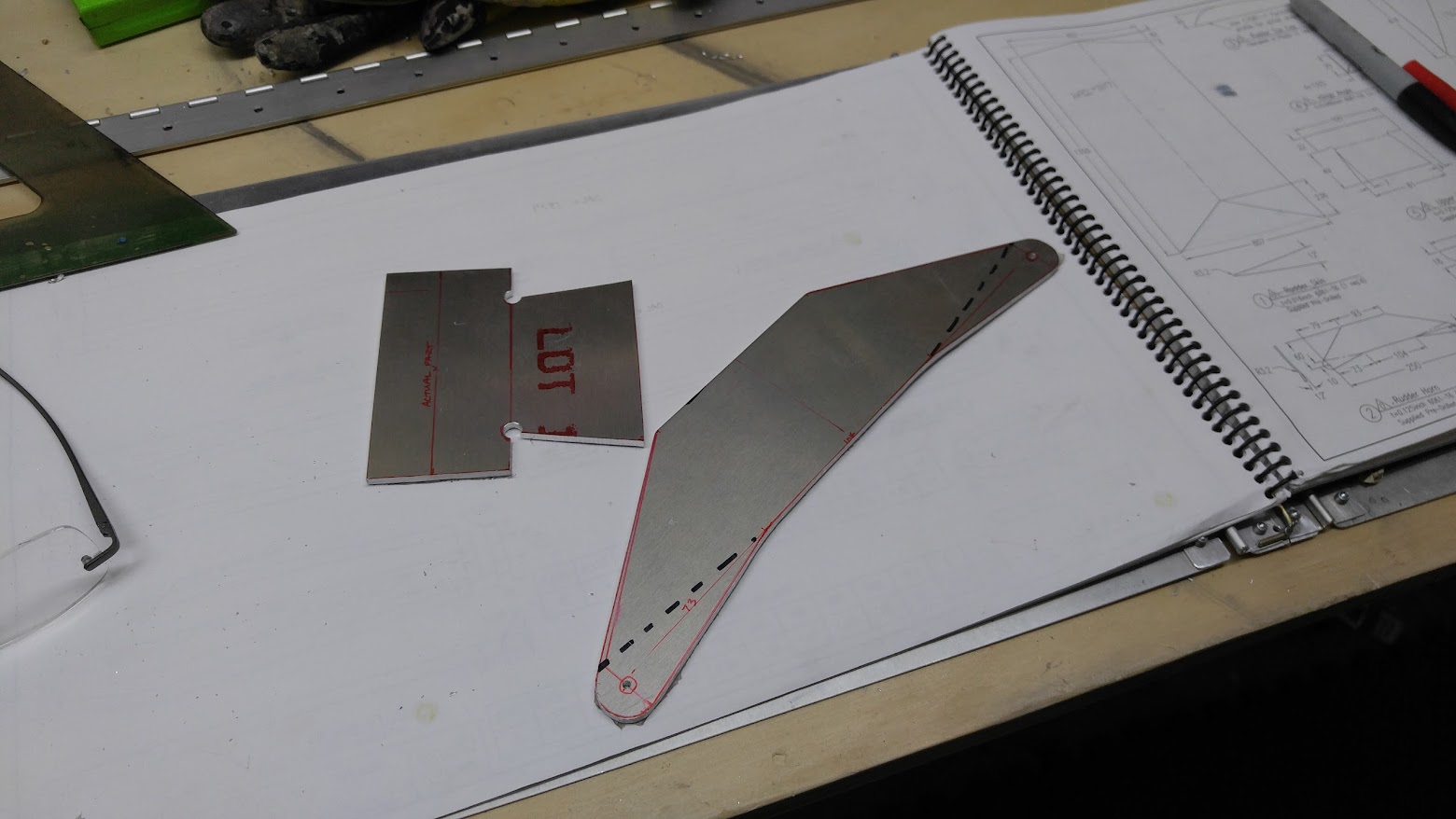 Rather than attempt to use my bending brake, the parts were clamped between wood blocks with the proper bend radius routed in, and they were whacked mightily with the deadblow hammer. The results were satisfying. 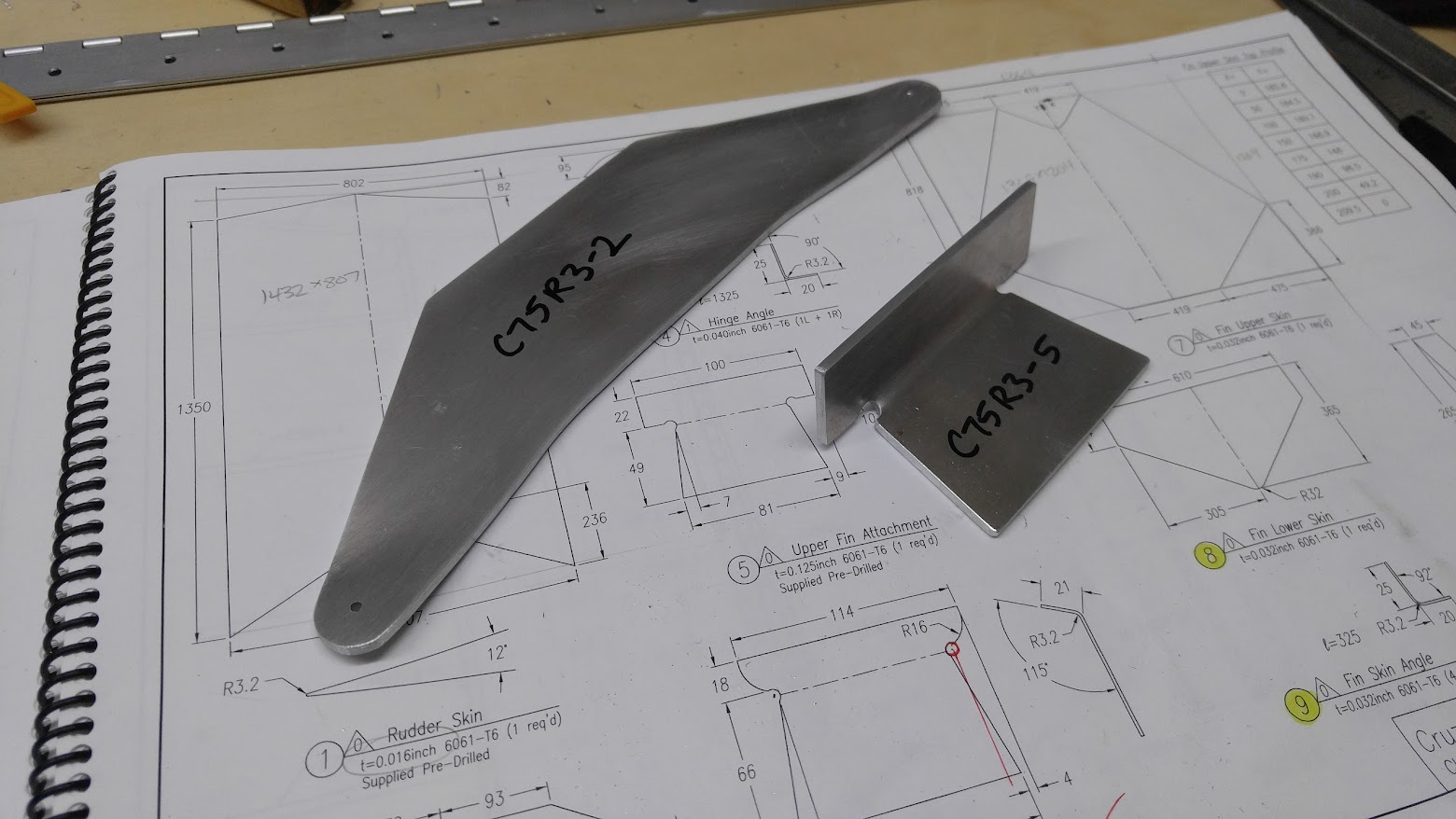 That’s it for this weekend’s playtime. As soon as I get some 2″x2″ square steel tube to use as spacers / jigs, I will start fitting the rudder skin to the skeleton. Stay tuned, and browse the rest of the photos here.