Hello fellow airplane nuts. This is an exciting entry, because the vertical fin is now assembled and riveted! The vertical fin was mostly done, except for bending the skin. I’d been putting that off, because it seemed a daunting job. With some help from Liz, it turned out to be pretty easy. Now let’s get to some pictures, shall we?

Here we are setting it up to bend the skin using the vacuum method. Liz was making a point of being silly for the picture, making some kind of “ta dah” sound. Or maybe it was “Look! I have tape!” 🙂 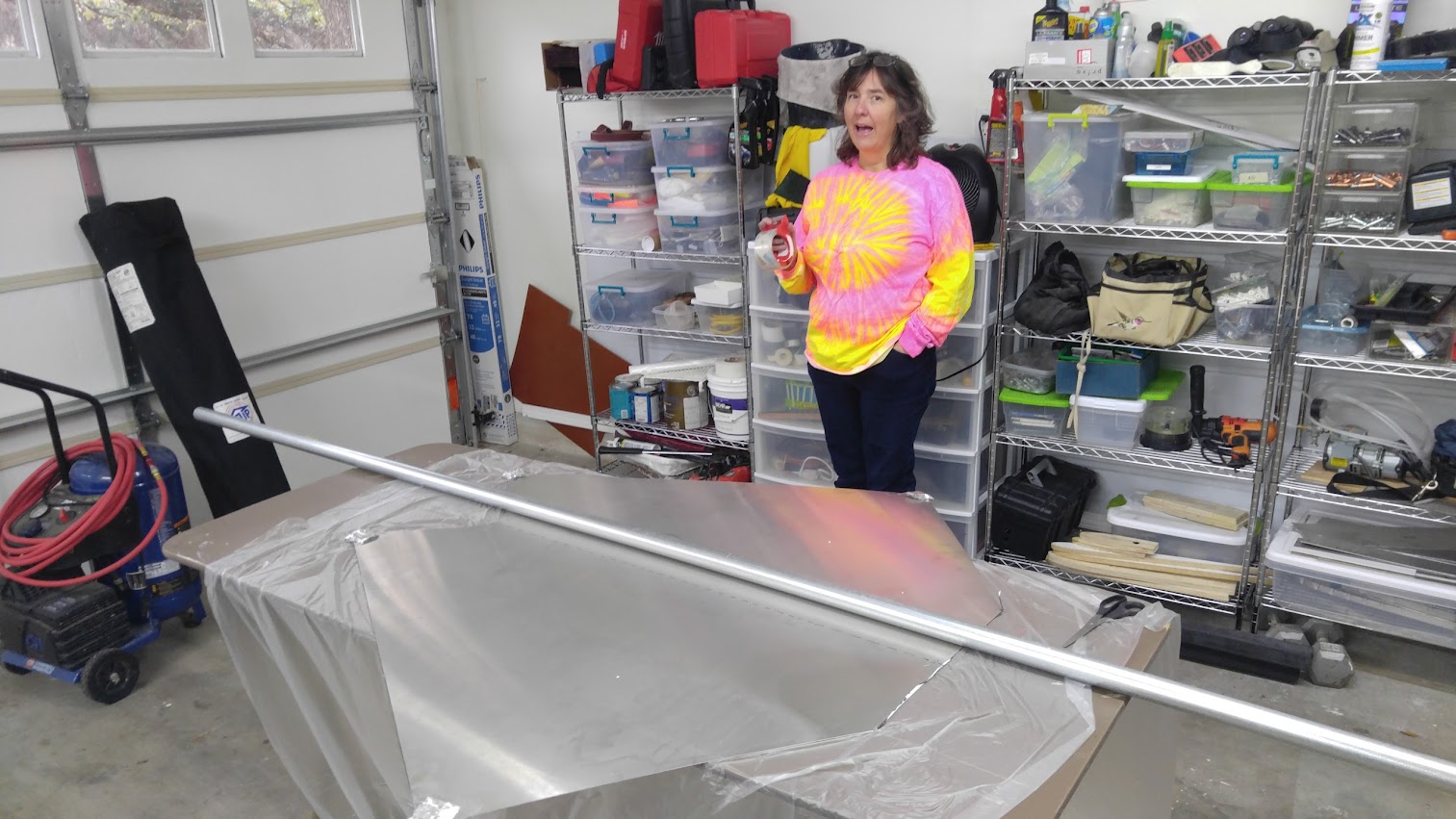 We used boards and clamps to keep the pipe in place along the proposed bend line. 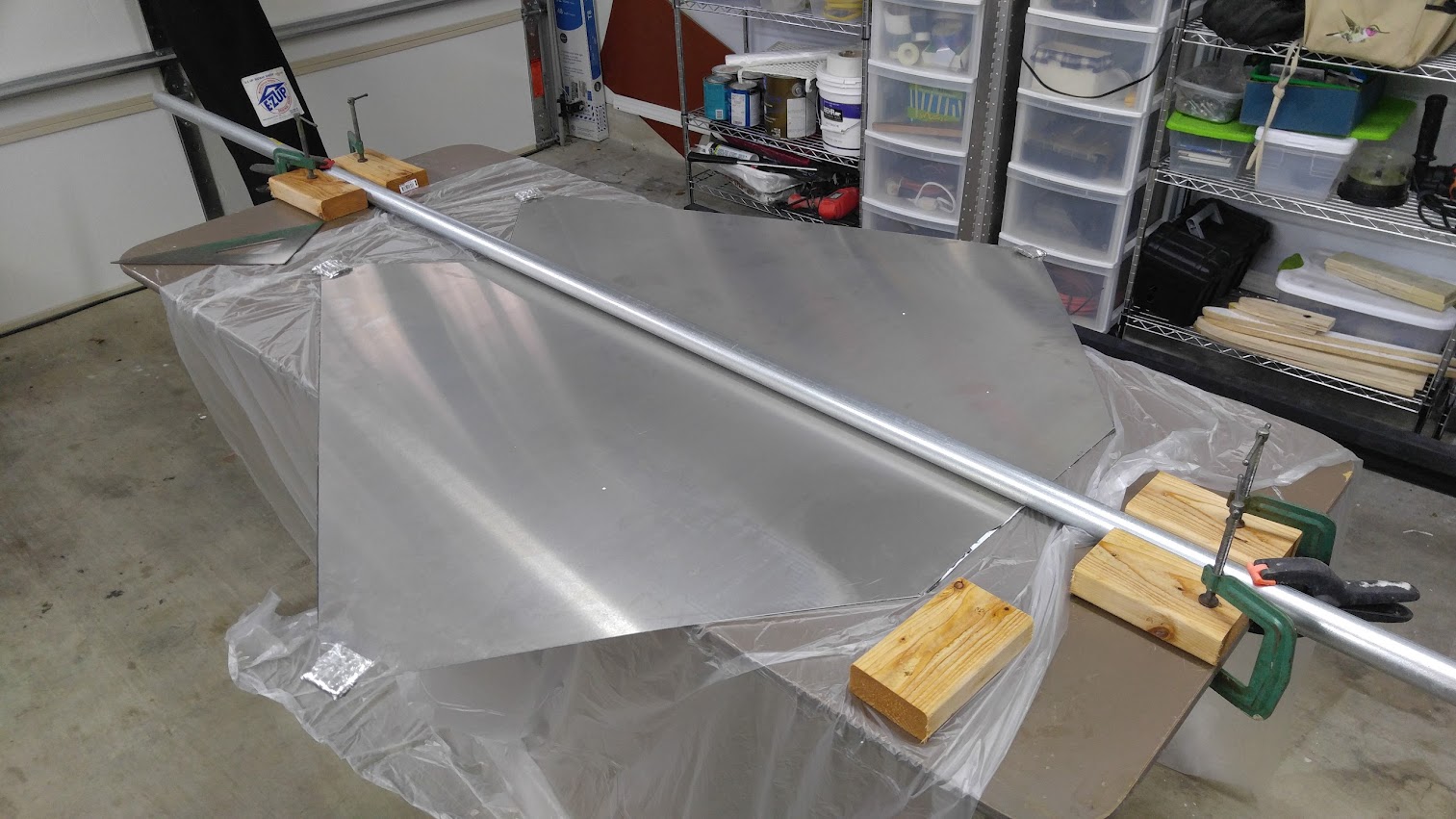 The next step is to pull the skin together at the trailing edge and tape it. There are no pictures of this process because it was a two person job, and I haven’t figured out how to get Ducky the dog to take pictures. Then it was time to gather up all the plastic and start taping it in place to seal it for the vacuuming. 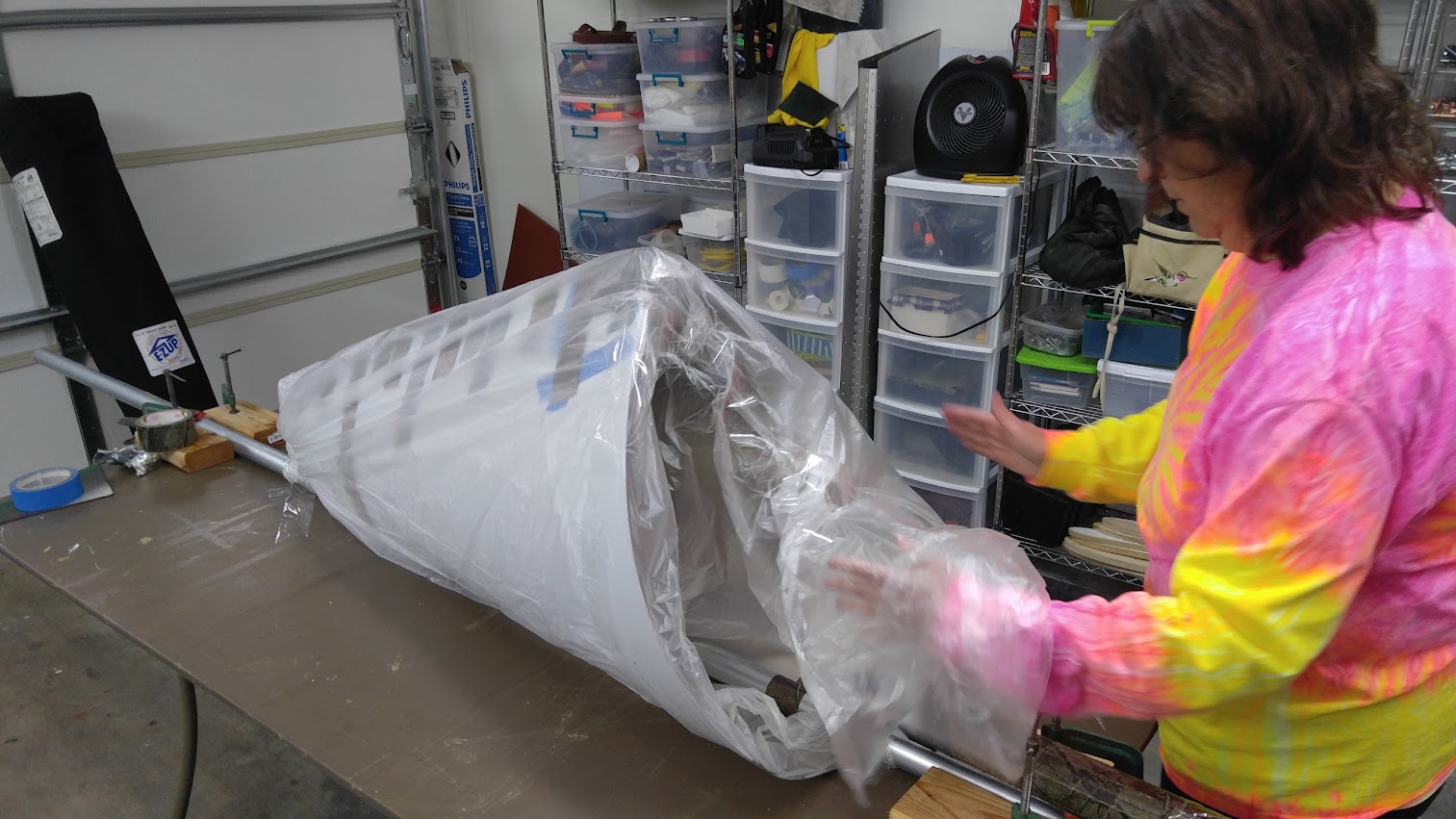 Here it is taped up as best we could, shop vac ready to go. 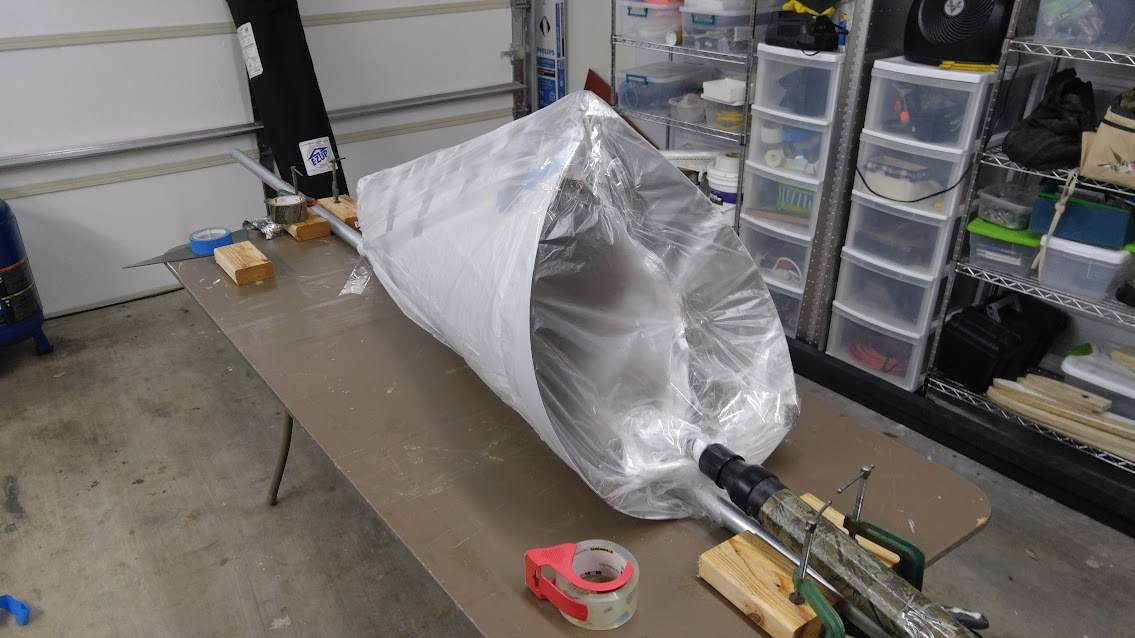 And the fun begins! The vacuum is turned on and it starts shrinking… 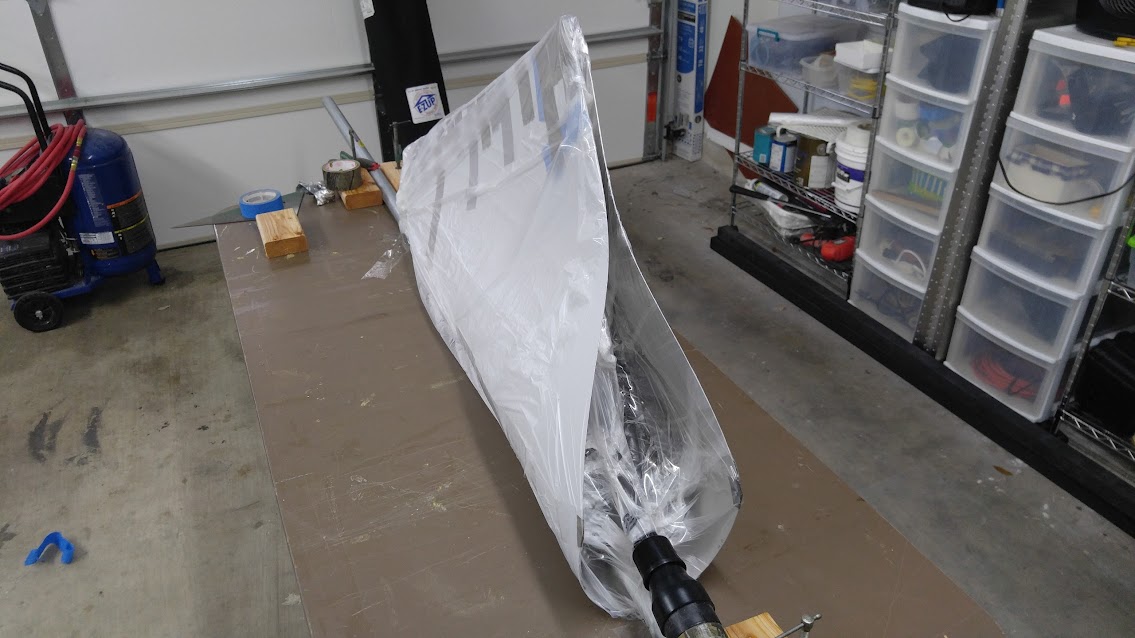 And in seconds it’s pulled as much as it’s going to go! 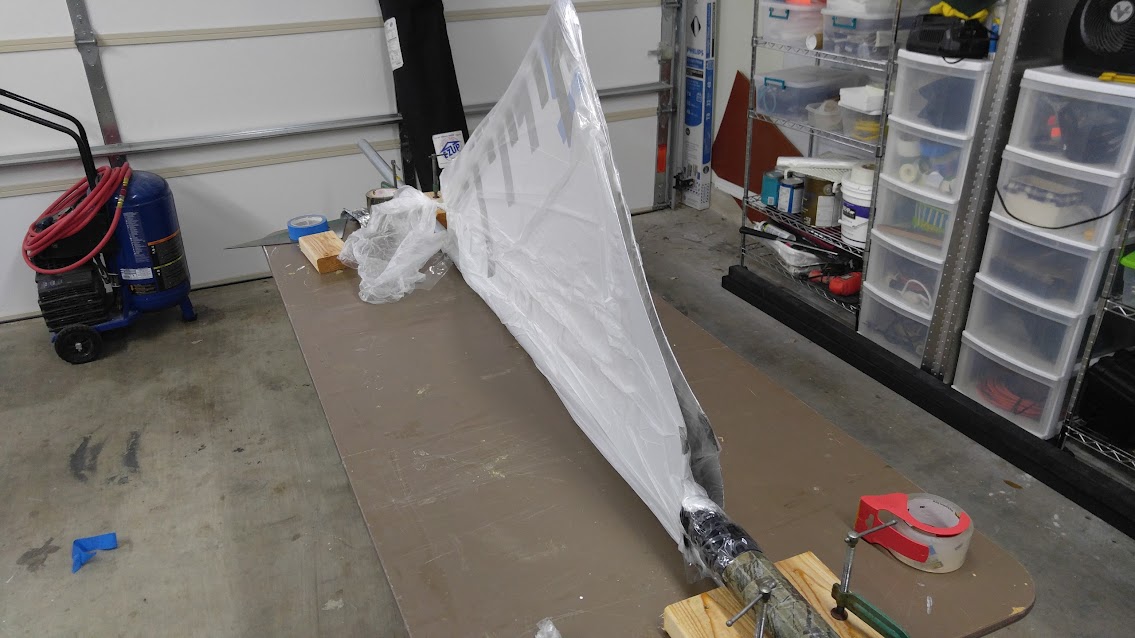 You may notice extra tape around the vacuum nozzle in the picture above compared to the rest. Yep, it pulled those adapters right off. What you can’t see is a piece of 3/4″ pipe taped on the end to get the vacuum in past the plastic, to keep it from sucking the plastic into the hose and cutting off the airflow. We had several false starts before we figured that out! Anyway, once we got it pulled down, it was time for the reveal. 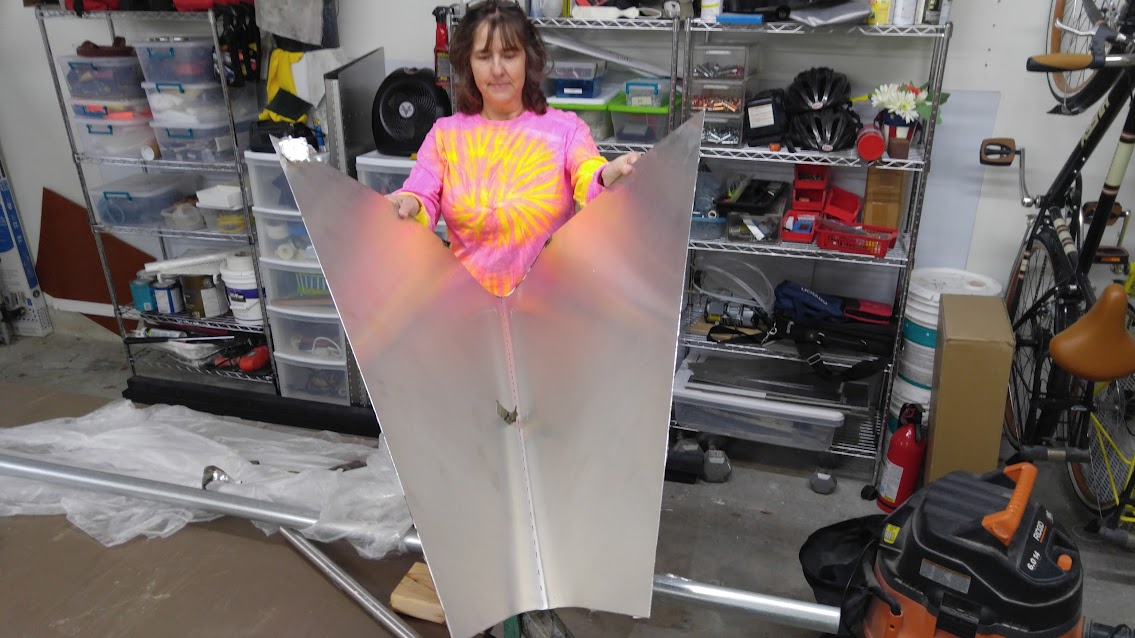 It worked great! Onward with the rest of the fin assembly. Next it was time to fit the ribs to the spar and start fitting the fin. 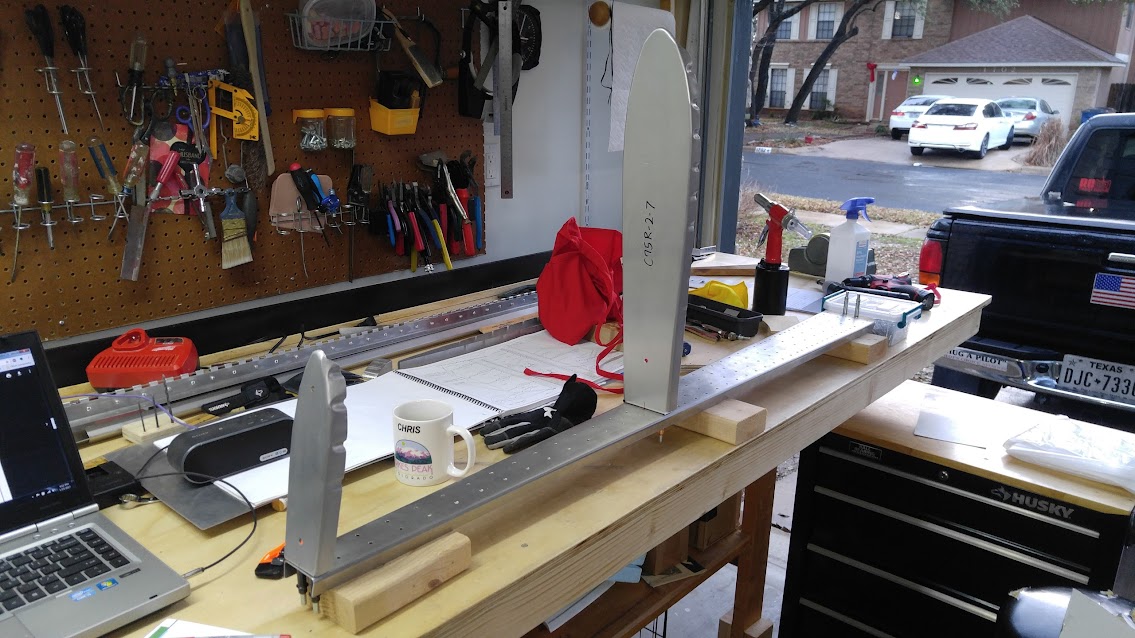 The Zenith assembly manual shows how to build a couple of wood jigs to help keep the fin skin held to the right shape to fit to the skeleton. It works well, and would be really difficult to do without using them. You also need to make some spacers to keep the spar assembly up off the bench. This lets the skin extend past the spar (it gets trimmed later) and also allows you to level the spar to check that the fin is being built straight. Here’s the first fit of the skin to the skeleton: 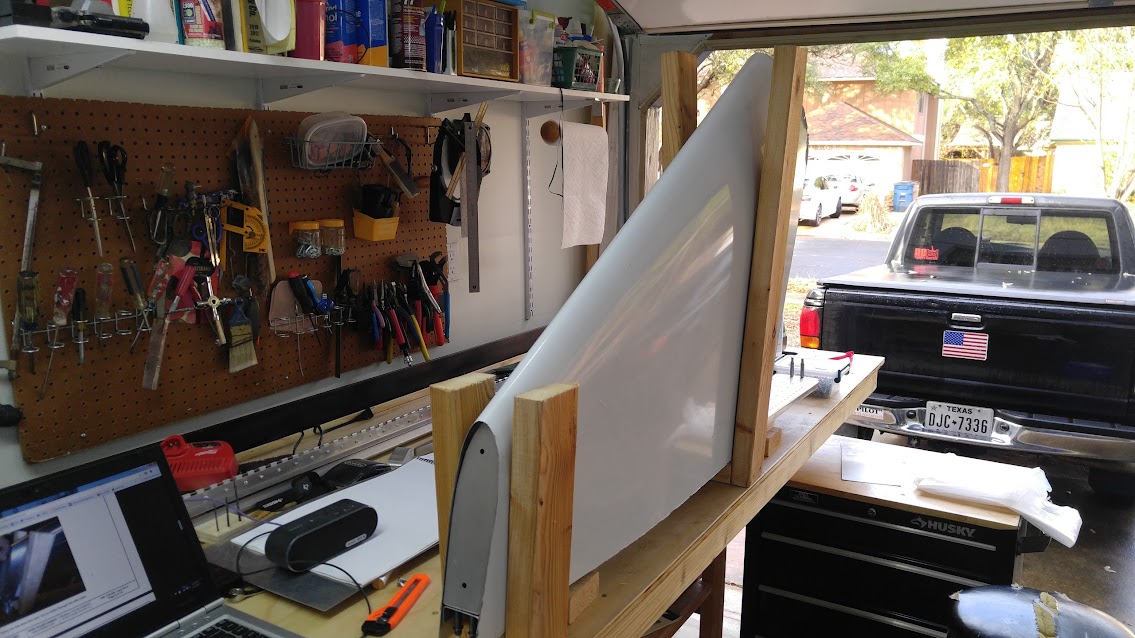 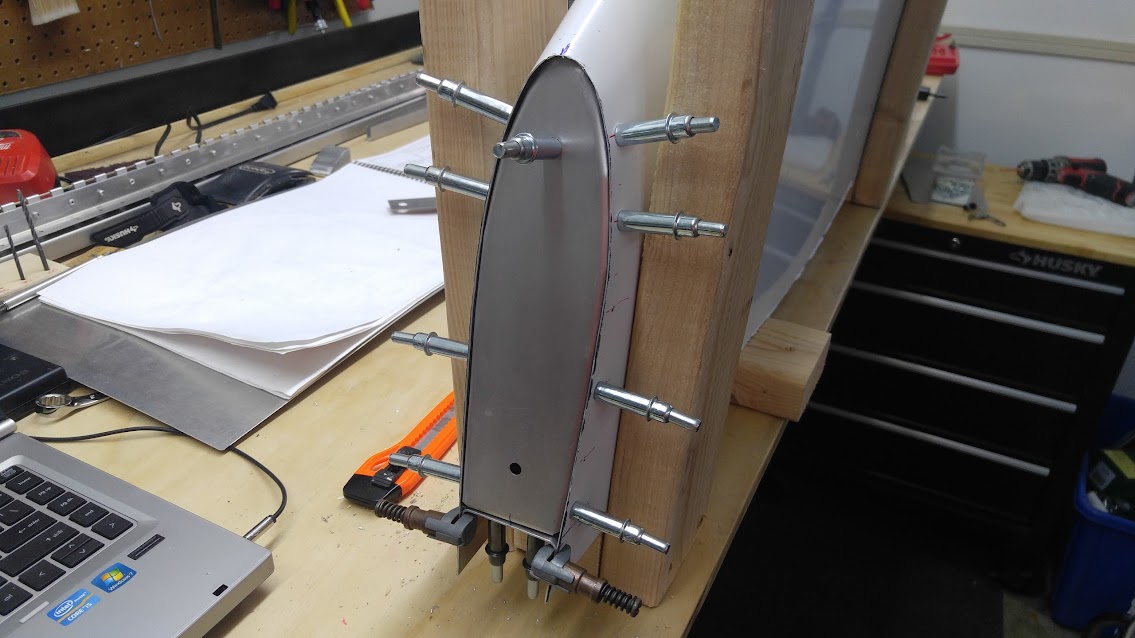 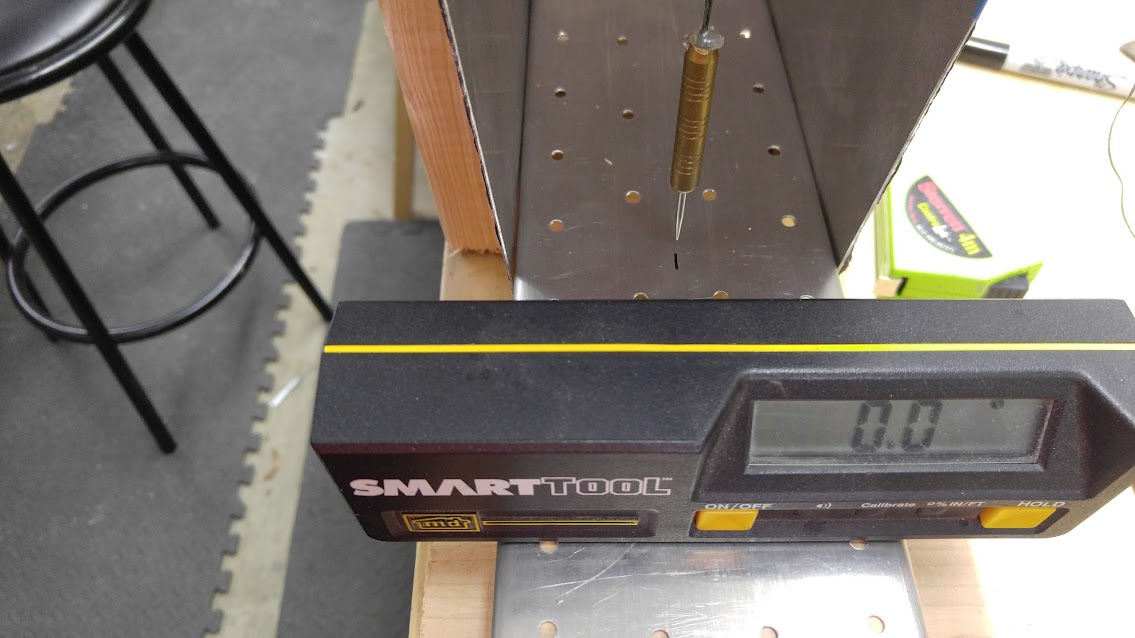 After you get this, you clamp the skin to the spar and back-drill the bottom rib using a 90 degree angle drill. It’s a fiddly step (and requires a helper) but it works. 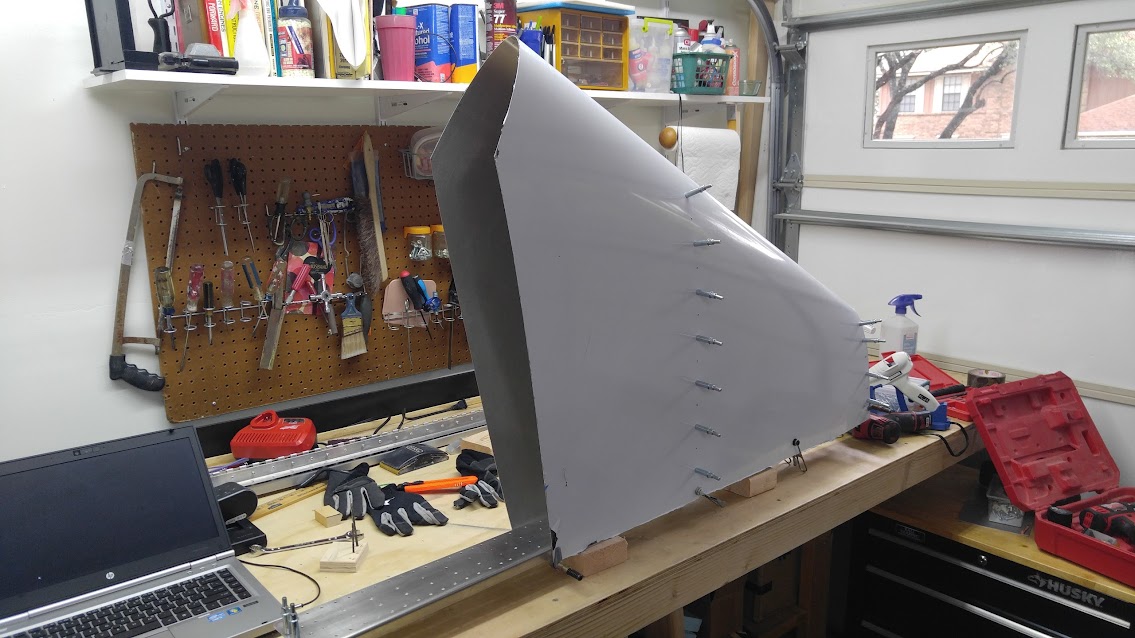 I was disappointed that I couldn’t get the leading edge of the bottom rib to fit all the way forward into the skin while also keeping it at a 90 degree angle to the spar. However, after seeing a few other builder pictures (made with factory kit parts) that look much the same I felt better about it. 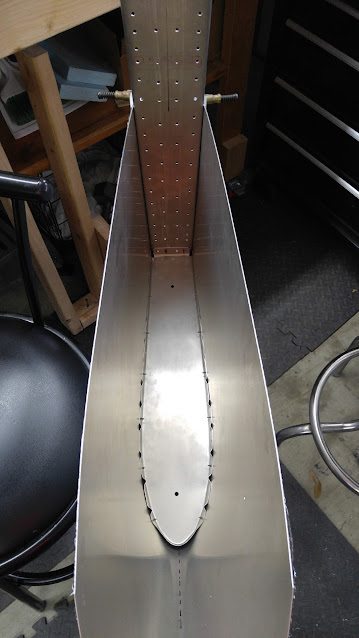 The skin then gets marked where the spar flange ends and the excess trimmed off. I used the Olfa knife to score it, then snapped the section off with seaming pliers. Worked great! 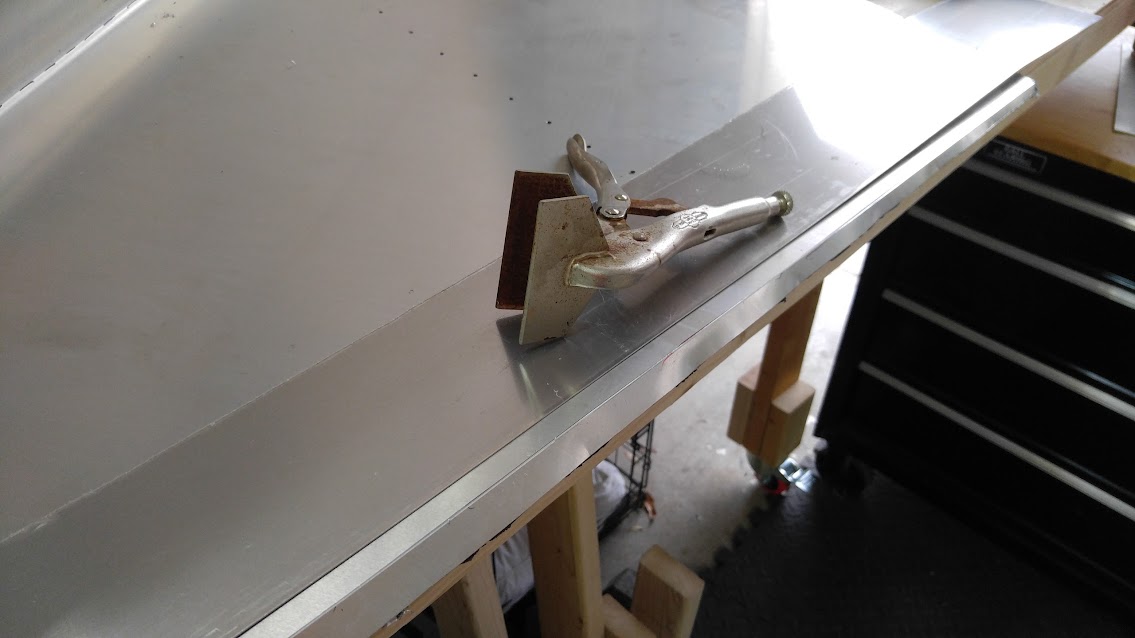 Before riveting everything up, the last thing I needed to do was make the cut on the bottom edge of the skin to clear the horizontal stabilizer. The problem is, the dimensions for these cuts are not shown on the plans! A plea for help in the Zenith forum got me quick help from fellow builder Michael Chesney. Thanks again Michael, you are da man! 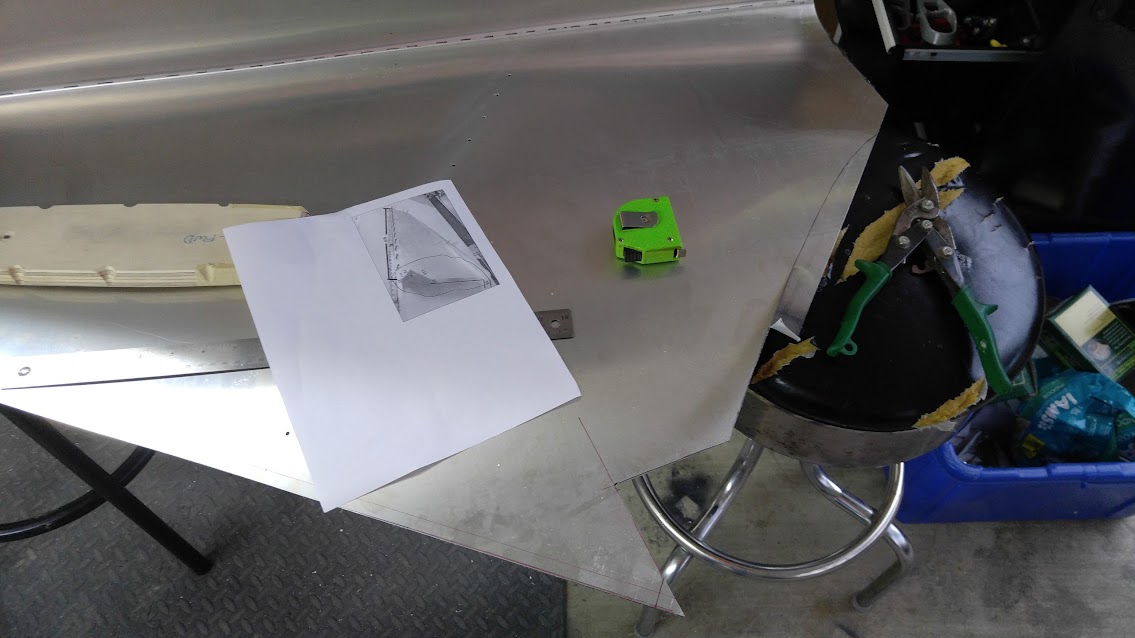 With the last excuse out of the way, it was time to start drilling the spar-to-skin rivet holes. 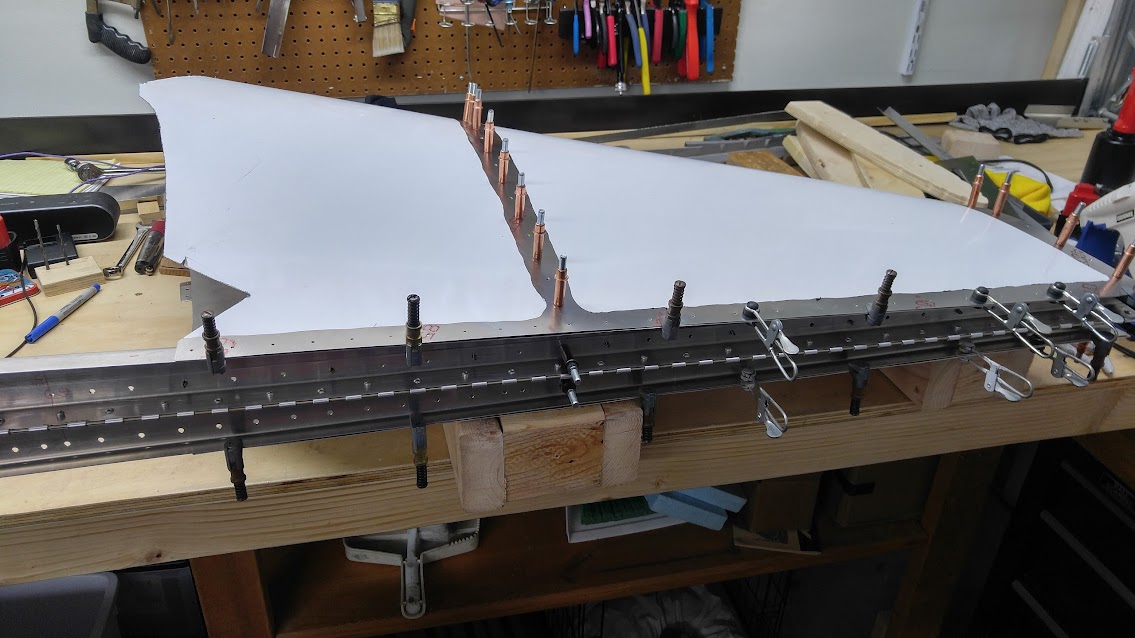 While drilling these holes I had one of those “oops” moments. I realized I had not taken the end of the spar doubler into account when laying out the rivet line on the spar-to-skin joint, and one of the rivets was too close to the end of the doubler! Two were, actually, the other side had the same issue. As you can see from the red line, I decided to just add an in-between rivet. If anyone ever asks why there are two rivets that close together on the fin I will just smack them. 😉 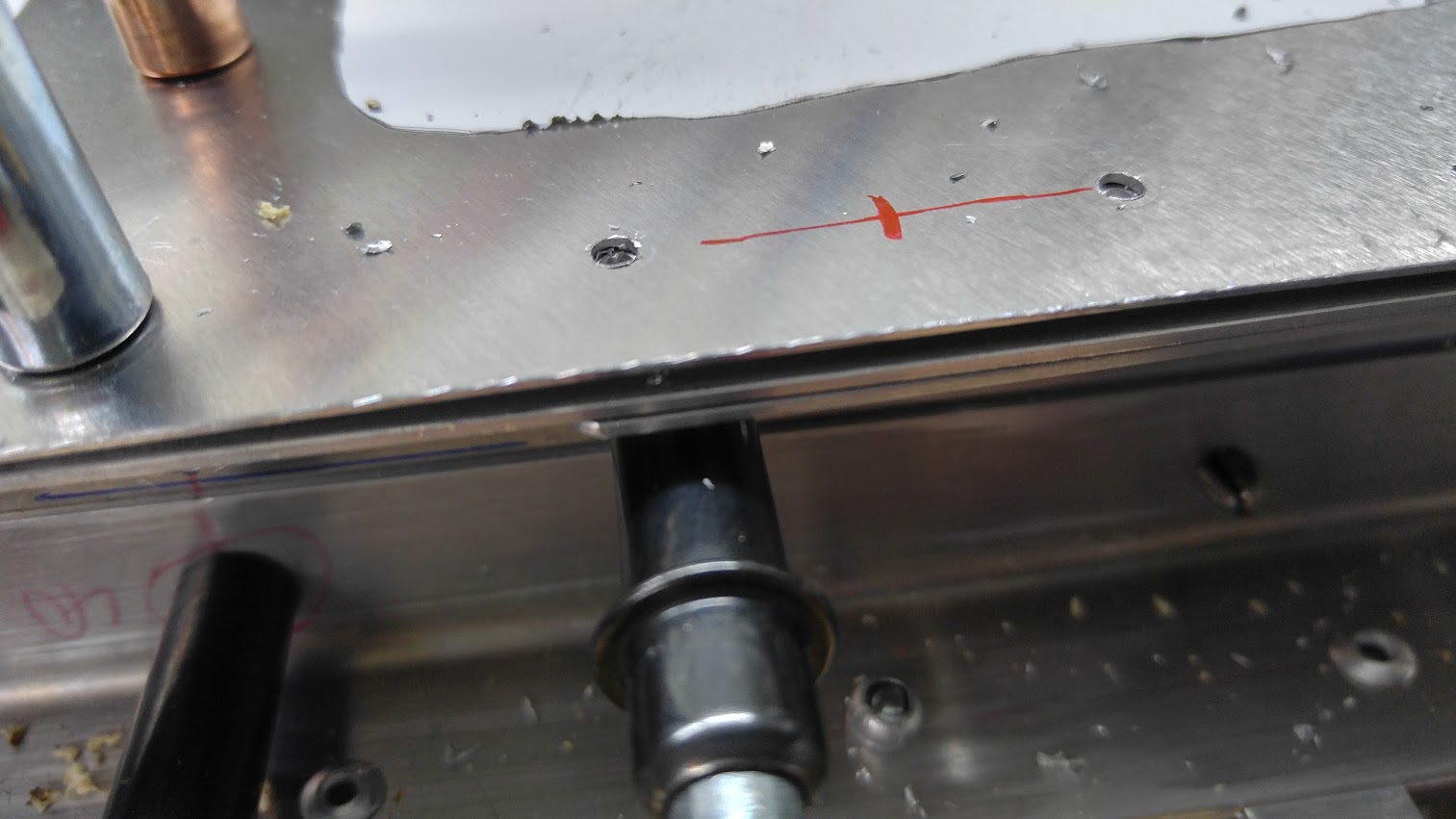 Here is that same area after it was all done: 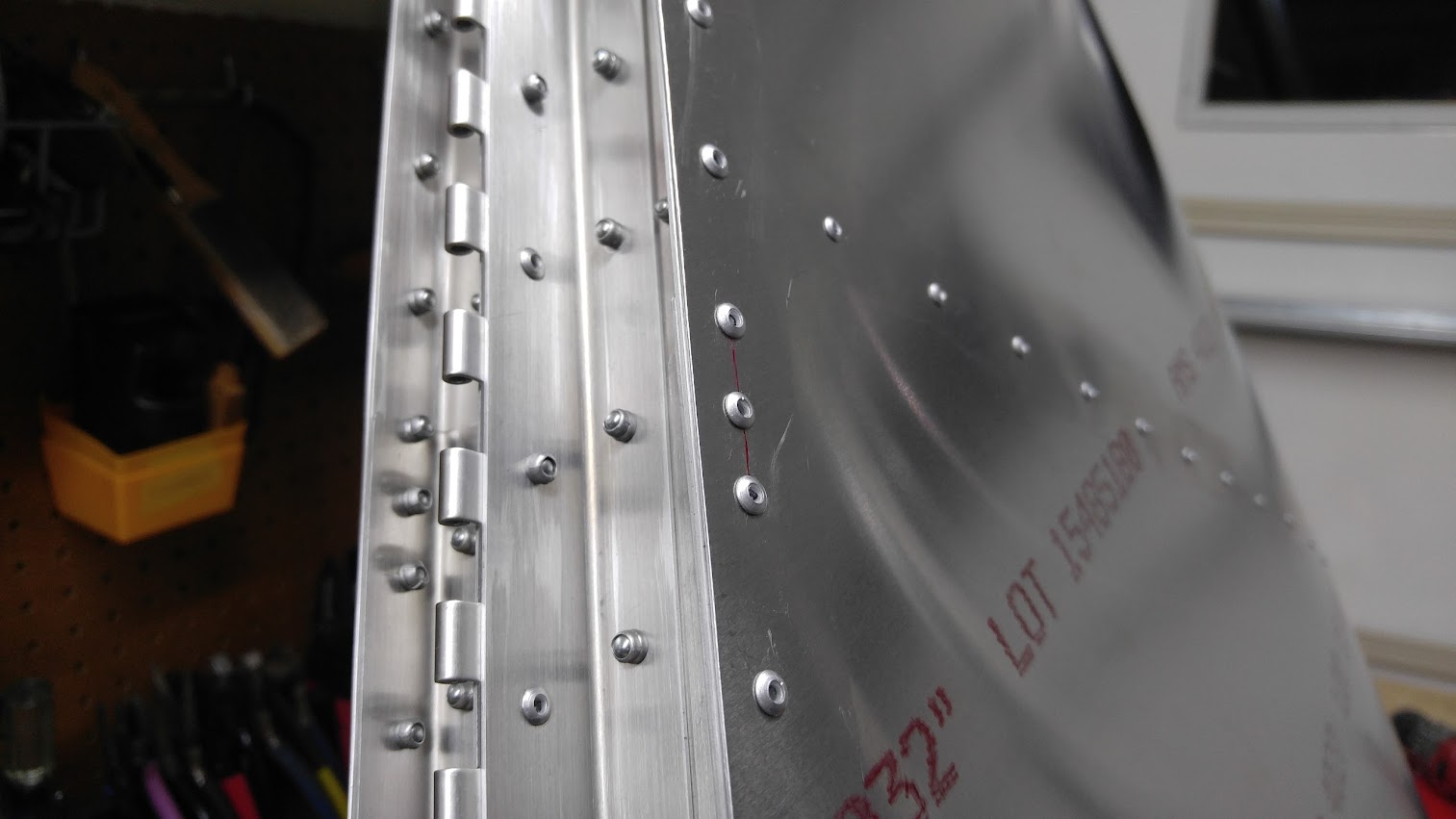 Let the riveting begin! After riveting the rudder with the hand riveter, I ordered and received a pneumatic riveter from Zenith. My hands are grateful for the money spent, that’s for sure! 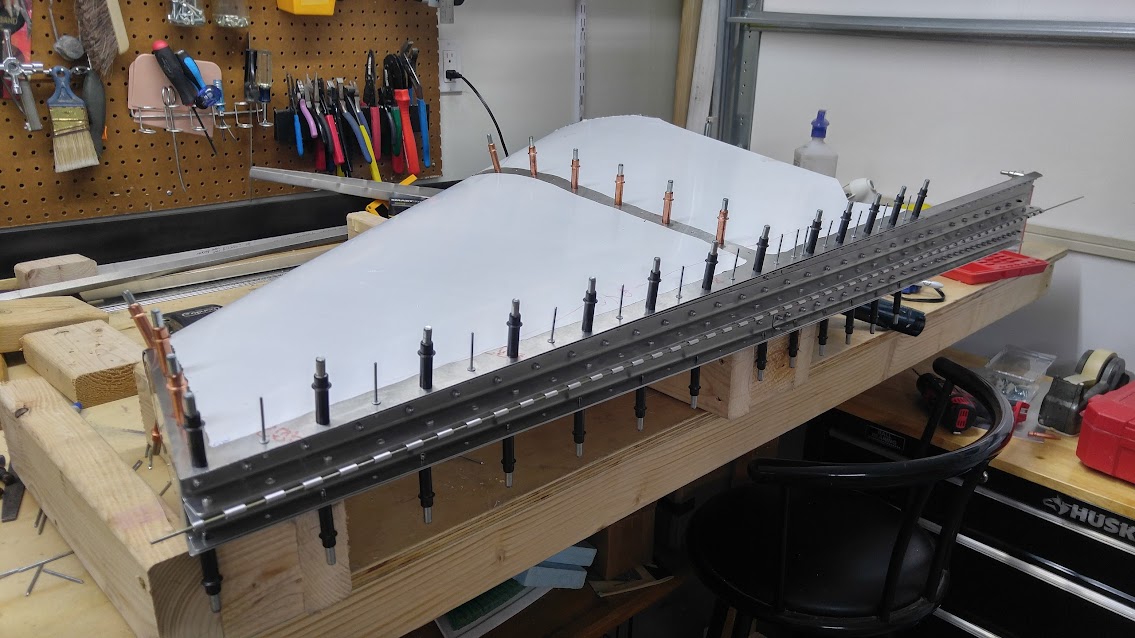 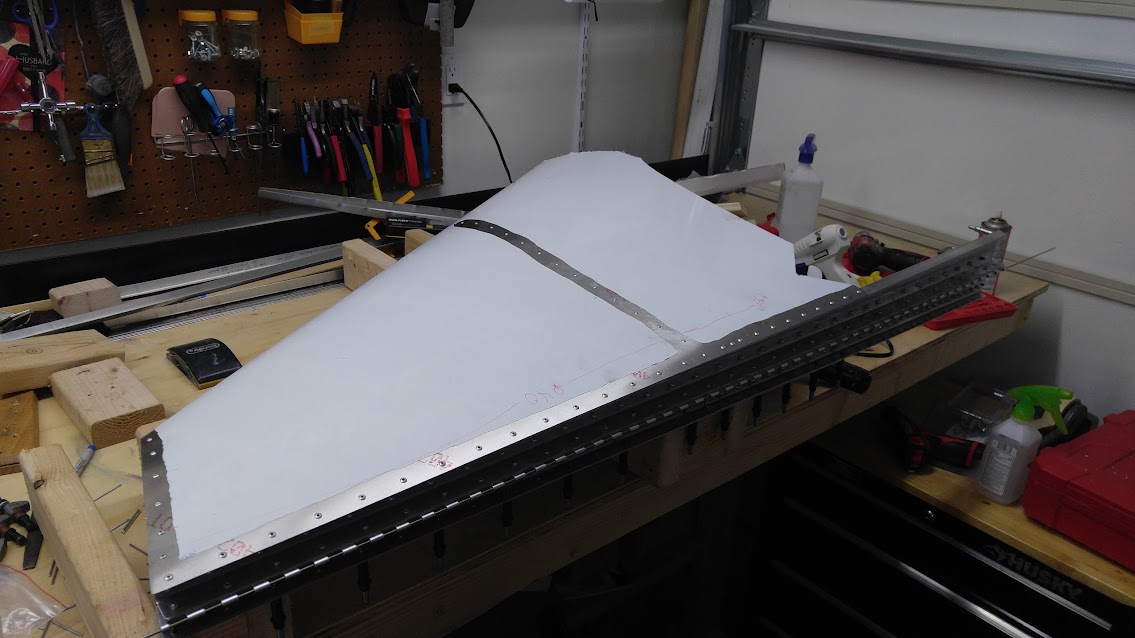 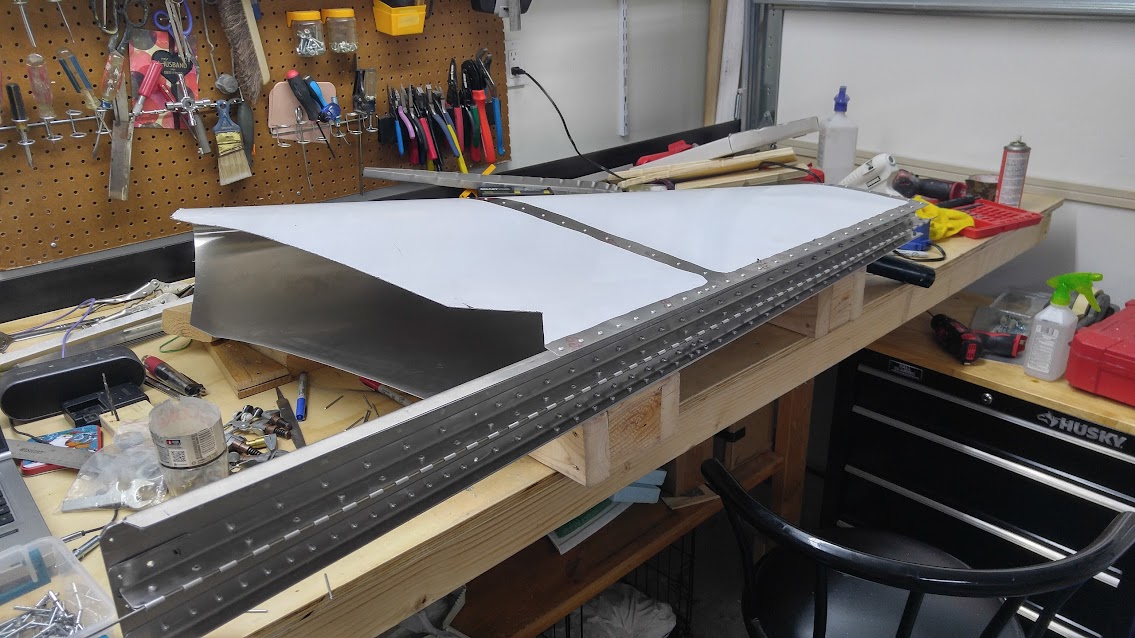 And I had to attach the rudder for a photo, before even peeling off the plastic from the fin! 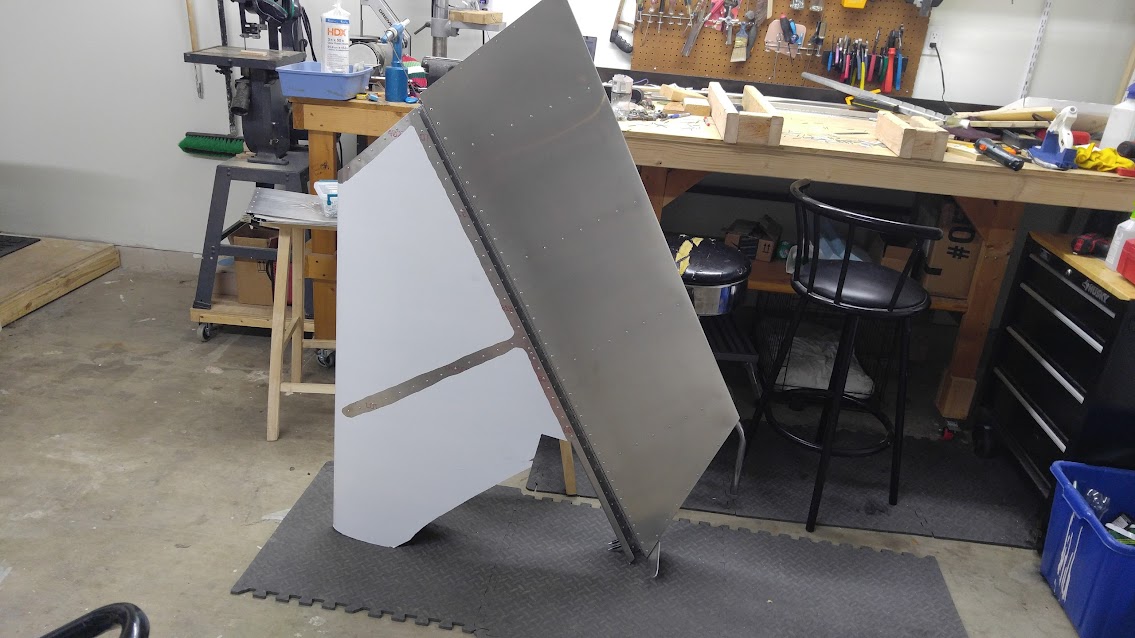 Plastic peeled, sitting on the bench to show the nice leading edge radius: 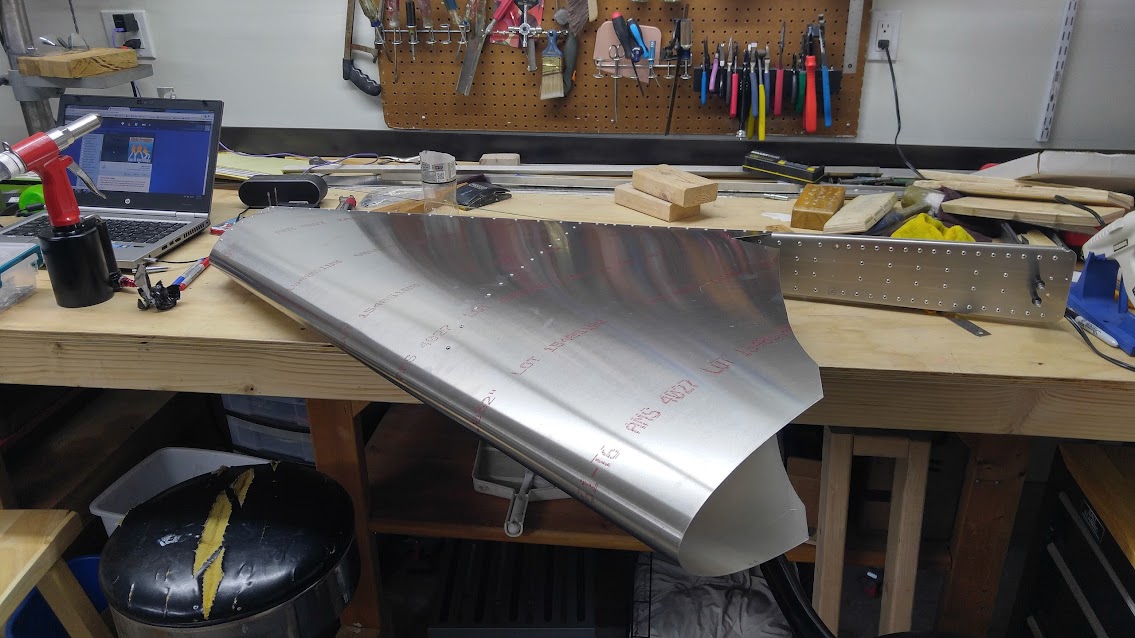 And here’s the obligatory photo of me holding the finished assembly: 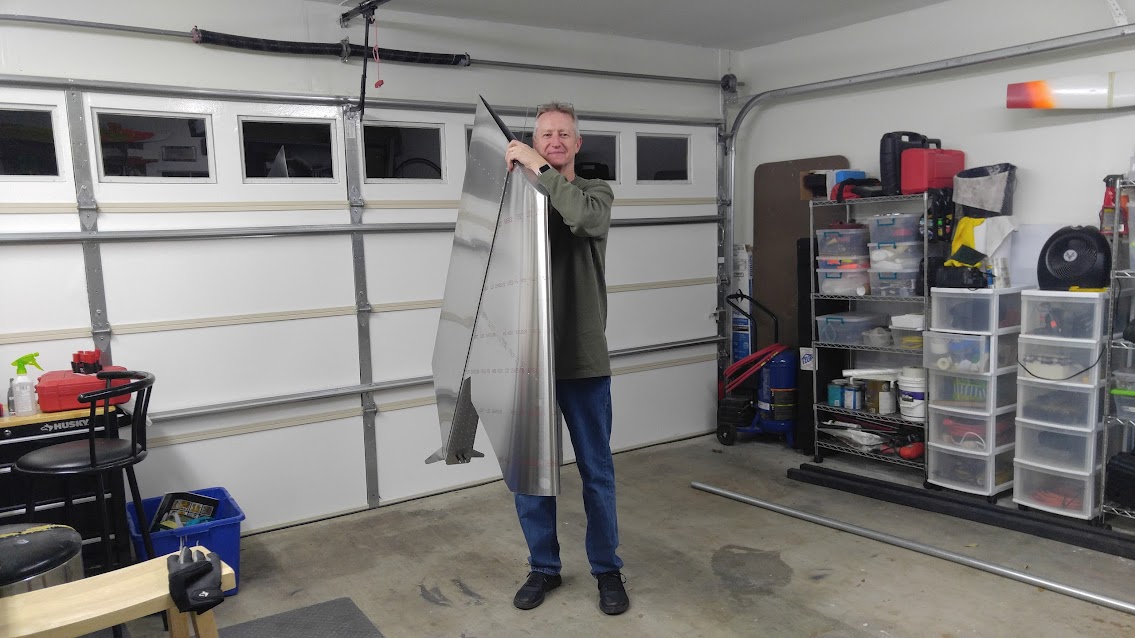 All that’s left to do is make the fiberglass cap for the top of the rudder, which will have a few challenges that will need to be addressed. But that’s a story for another day. As always, you can browse all the photos in my 750 Cruzer album.